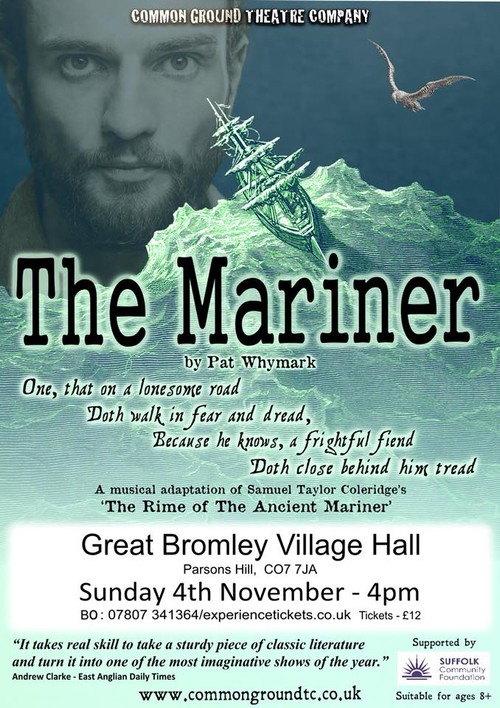 “It takes real skill to take a sturdy piece of classic literature and turn
it into one of the most imaginative shows of the year.”
Andrew Clarke, reviewing our 2015 tour of The Count of Monte Cristo in the EADT

“Lively and most entertaining...The play has a wonderful flow...These talented actor-musicians often chop and change characters with ease. The humour is great and there are plenty of ‘one liners’ to add to the chuckles"
Robert Wright, reviewing our 2017 tour of The Old Curiosity Shop in the Eastern Daily Press.

After their acclaimed productions of The Old Curiosity Shop & Sherlock Holmes and The Hooded Lance in 2017, Common Ground Theatre Company return with this enthralling, slightly surreal adaptation of Coleridge's The Rime of The Ancient Mariner, with its themes of ecological disaster, man's destructive compulsions, and the death and rebirth of imagination and faith.

The show will feature live action, puppetry, film and original music by Pat Whymark, sung by a live choir. Coleridge will be played by Patrick Neyman & The Mariner by Julian Harries.

The Mariner looks at episodes from the extraordinary life of Samuel Taylor Coleridge in the context of his most famous poem, and examines how an artist’s work can be seen as an allegory for their life story. The Rime has a strangely prophetic relevance to Coleridge himself, but for the reader, has the wider themes of ecological disaster, our own destructive compulsions, and the death and rebirth of imagination.

This piece holds new challenges for us as theatre makers to create a play which is a fusion of these themes. Using original music as an additional conduit for the emotional breadth of the poem, we hope to share with our audience the profound effect the poem has had on us, and to open the way for their own unique experience.

We will be creating an all female community choir for this production who will perform in teams over the course of the tour. Work begins with the choir at the end of May. The show will also contain feature puppetry and film projection.

ABOUT COMMON GROUND...
Common Ground Theatre Co was founded in 2007 by Pat Whymark and Julian Harries to create new music theatre. We have been touring steadily since then, mainly within East Anglia, producing eighteen new plays which have been received stunning reviews both here and in London. We have received funding from Heritage Lottery Fund, The Suffolk Foundation, The Seckford Foundation, Suffolk Youth Ops, The Brook Trust and Suffolk Single Gateway.

Common Ground are committed to keeping small-scale theatre alive and well in East Anglia, presenting shows that are, first and foremost, entertaining. Our productions are character-based and always emotionally engaging.

Julian Harries & Pat Whymark are the creative team behind Stoat Hall, The Mystery of St Finnigan's Elbow & many more Eastern Angles Christmas shows, and it is that sense of playfulness that we hope runs through all our work. As an actor Julian has appeared in Eastenders, Detectorists, Spies of Warsaw, Doctors, and performed with The Royal Shakespeare Company, Royal National Theatre and in the West End.